How we do it 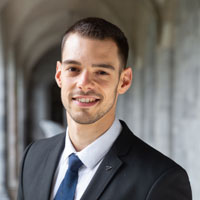 Borian obtained his medical degree at the Medical University of Sofia and until recently was an Emergency Medicine Doctor getting access to a wide range of patients. Prior to this, he was involved in several innovative projects. One of which, using CRISPR/Cas Interference won him and his team a silver medal at the International Genetically Engineered Competition, the biggest synthetic biology competition in the world held in Boston, USA. Another project expanded into a startup targeting patients with Celiac Disease, where he held a leadership position. He was also involved in another project for the creation of a novel microfluidic system targeting patients with respiratory infections, which received funding at the end of his involvement. Thanks to his collaboration in different kinds of innovative projects, Borian has experience working and prototyping with different kinds of technologies including microfluidic chips, antibodies, CRISPRi, spectroscopy, microcontrollers which allows him to draw inspiration from other fields when thinking of solutions to a problem. Borian is also a successful investor, which allowed him to fund one of his projects until external funding was gathered. He firmly believes that BioInnovate will give his team the tools and know-how to succeed in the med-tech sector, which he has a keen interest in for many years now. His clinical experience in Emergency Medicine has given him a lot of experience in gathering unmet clinical needs in different areas of the Healthcare system and decisively believes that empathy towards patients is key towards understanding and addressing their hidden needs. In his spare time, he enjoys reading outside of his field, weightlifting, skiing, horse riding, investing, and recently working with computer-aided design programs and 3D printing.

Situated on the prestigious campus of National University of Ireland Galway within the medieval city of Galway, European Capital of Culture in 2020, with equal easy access to the wilderness of Connemara in the west and the European mainland in the east, BioInnovate boasts a superb location.

Our affiliation with Stanford BioDesign has helped us to become one of the world’s leading innovation hubs with an immense debt of gratitude owed to Enterprise Ireland for both their financial and professional support in helping BioInnovate grow.